Radio Free Virginia
Comments closed
Facebook Racism:
If you are a Nazi white supremacist piece of garbage hater of Jews this is NOT the place for you. Your no patriot if you think some people are worth less than others because of the color of their skin.
https://dailycaller.com/2020/01/28/base-white-nationalist-gun-rally-va/
he story of last week’s gun rights rally in Virginia was one of narrowly-avoided disaster, according to several mainstream outlets, with law enforcement stepping in just in the nick of time to prevent a mass shooting.
The FBI’s own court filings tell an entirely different story though, one in which white extremists stumbled from one surveillance trap to another without much situational awareness.
The New York Times, the Associated Press, and BuzzFeed narrative centered around the arrest of three men, all members of the The Base, a white supremacist organization that interacts mostly online and aims to create a white ethno-state. The media implied the group was arrested while planning an attack at the Virginia rally, but that is not what law enforcement documents show.
Firstly, the group decided not to actually go to a rally. They also decided not to start any violence. They planned to wait for a race war to start, as voice recordings show, and then join in.
Legislation:
More bad gun bills from the senate.  Many previously covered.
https://www.facebook.com/VCDL.ORG/posts/3677464948937814?__tn__=K-R 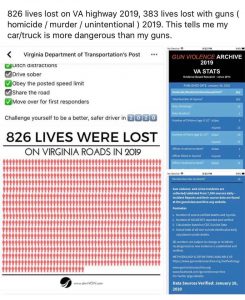