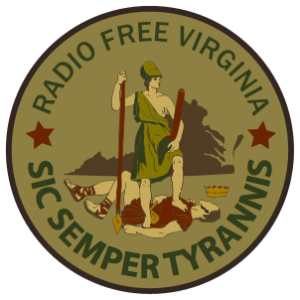 If you are in Virginia and now find yourself behind enemy lines then Radio Free Virginia is for you.

This podcast exists to bring you truth and information in a summary format so you can keep up to date on what the communists in Richmond are doing and how you can combat their agenda.

This is a home for Patriots, communists need not apply, nor those that hate America.

Our first show launched on December 6, 2019 and we strive to bring you a weekly podcast and informational blog (show notes) to keep up to date on the infringements on your liberty and the growth of tyranny in Virginia and outside of the commonwealth if it effects you!

Your host is Hank Reardon. A patriot producing this show from occupied territory. Hank is a former Steel Company CEO. A former Republican chairman, he started a local tea party and was a leader for over 2 years, but  he was too radical for that group. He is a NRA firearms instructor and and active competitive shooter. He regularly teaches people how to safely shoot, move, and communicate. Something that if the VA tyrants get their way will be illegal. He will continue to train others regardless. He is a Christian, libertarian leaning, constitutional, Jeffersonian, revolutionary conservative. Now that all of this is out of the way this show is sure to make it on the SPLC hate list. Radio Free Virginia dares to speak truth, and to call out Marxists traitors to our state and country.

Join us by helping to spread the word about this show.

If you’d like to keep an eye on bills that are making their way through the legislature there is a website dedicated to this.

You can also search by topics such as “weapons”

The provisions of this section notwithstanding, any locality may by ordinance prohibit the possession or carrying of firearms, ammunition, or components or any combination thereof in a public space during a permitted event or an event that would otherwise require a permit.

Be it enacted by the General Assembly of Virginia:

A person shall be is guilty of unlawful paramilitary activity, punishable as a Class 5 felony if he:

1. Teaches or demonstrates to any other person the use, application, or making of any firearm, explosive, or incendiary device, or technique capable of causing injury or death to persons, knowing or having reason to know or intending that such training will be employed for use in, or in furtherance of, a civil disorder; or

2. Assembles with one or more persons for the purpose of training with, practicing with, or being instructed in the use of any firearm, explosive, or incendiary device, or technique capable of causing injury or death to persons, intending to employ such training for use in, or in furtherance of, a civil disorder; or

3. Assembles with one or more persons with the intent of intimidating any person or group of persons by drilling, parading, or marching with any firearm, any explosive or incendiary device, or any components or combination thereof.

Purchase of handguns; limitation on handgun purchases; penalty. Prohibits any person who is not a licensed firearms dealer from purchasing more than one handgun in a 30-day period and establishes such an offense as a Class 1 misdemeanor. The bill exempts from this provision (i) persons who have been issued a certificate by the Department of State Police under certain circumstances and with an enhanced background check, (ii) law-enforcement agencies and officers, (iii) state and local correctional facilities, (iv) licensed private security companies, (v) persons who hold a valid Virginia concealed handgun permit, (vi) persons whose handgun has been stolen or irretrievably lost or who are trading in a handgun, (vii) purchases of handguns in a private sale, and (viii) purchases of antique firearms.

Firearm transfers; criminal history record information checks; penalty. Requires a background check for any firearm transfer and directs the Department of State Police (the Department) to establish a process for transferors to obtain such a check from licensed firearms dealers. A transferor who sells a firearm to another person without obtaining the required background check is guilty of a Class 6 felony. The bill also provides that a transferee who receives a firearm from another person without obtaining the required background check is guilty of a Class 1 misdemeanor. The bill exempts transfers (i) between immediate family members; (ii) that occur by operation of law; (iii) by the executor or administrator of an estate or by the trustee of a testamentary trust; (iv) at firearms shows in accordance with law; (v) that are part of a buy-back or give-back program; (vi) of antique firearms; (vii) that occur at a shooting range, shooting gallery, or any other area designed for the purpose of target shooting or for use during target practice, a firearms safety or training course or class, a shooting competition, or any similar lawful activity; or (viii) that are temporary transfers that (a) occur within the continuous presence of the owner of the firearm or (b) are necessary to prevent imminent death or great bodily harm. The bill removes the provision that makes background checks of prospective purchasers or transferees at firearms shows voluntary. The bill also provides that the Department shall have three business days to complete a criminal history record information check before a firearm may be transferred.

For a future Show:

Same-sex marriages; civil unions. Repeals the statutory prohibitions on same-sex marriages and civil unions or other arrangements between persons of the same sex purporting to bestow the privileges and obligations of marriage. These prohibitions are no longer valid due to the United States Supreme Court decision in Obergefell v. Hodges, 576 U.S. ___ (June 26, 2015).

Constitutional amendment (first resolution); marriage. Proposes the repeal of the constitutional amendment dealing with marriage that was approved by referendum at the November 2006 election. That amendment to the Bill of Rights (i) defines marriage as “only a union between one man and one woman”; (ii) prohibits the Commonwealth and its political subdivisions from creating or recognizing “a legal status for relationships of unmarried individuals that intends to approximate the design, qualities, significance, or effects of marriage”; and (iii) prohibits the Commonwealth or its political subdivisions from creating or recognizing “another union, partnership, or other legal status to which is assigned the rights, benefits, obligations, qualities, or effects of marriage.” The provisions of this section of the Constitution of Virginia are no longer valid as a result of the United States Supreme Court decision in Obergefell v. Hodges, 576 U.S. ___ (June 26, 2015).

5. Each congressional and legislative district shall be composed of compact territory. Districts shall not be oddly shaped or have irregular or contorted boundaries, unless justified because the district adheres to political boundary lines. Fingers or tendrils extending from a district core shall be avoided, as shall thin and elongated districts and districts with multiple core populations connected by thin strips of land or water. The General Assembly shall employ one or more standard numerical measures of individual and average district compactness to provide an objective assessment of a districting plan’s compactness, both statewide and district by district.

Election day voter registration; pilot program. Requires the State Board of Elections to develop a pilot program for election day voter registration, by which a person who (i) offers to vote on election day but is not a registered voter, (ii) provides one of the allowable forms of identification specified by law, and (iii) provides proof of his residency, in a form specified by the State Board for this purpose, in the precinct in which he offers to vote, shall be permitted to register to vote and to cast a ballot. The bill provides a process by which the validity of such votes is determined. The bill requires participating localities to provide information on the implementation of the pilot program in its locality to the State Board by December 1 of each year in which it participates. The bill requires the State Board to submit a report on the pilot program to the Governor, the General Assembly, and the House and Senate Committees on Privileges and Elections, including a recommendation as to whether there should be statewide election day voter registration. The bill has an expiration date of December 31, 2022.

Constitutional amendment (first resolution); Governor’s term of office. Permits a Governor elected in 2025 and thereafter to succeed himself in office. The amendment allows two four-year terms (either in succession or not in succession) but prohibits election to a third term. Service for more than two years of a partial term counts as service for one term.

Local disposable paper and plastic bag tax. Authorizes any locality to impose a tax of five cents per bag on disposable paper bags or disposable plastic bags provided to consumers by certain retailers, with certain bags being exempt from the tax. The bill allows every retailer that collects the tax to retain one cent of the five-cent tax.